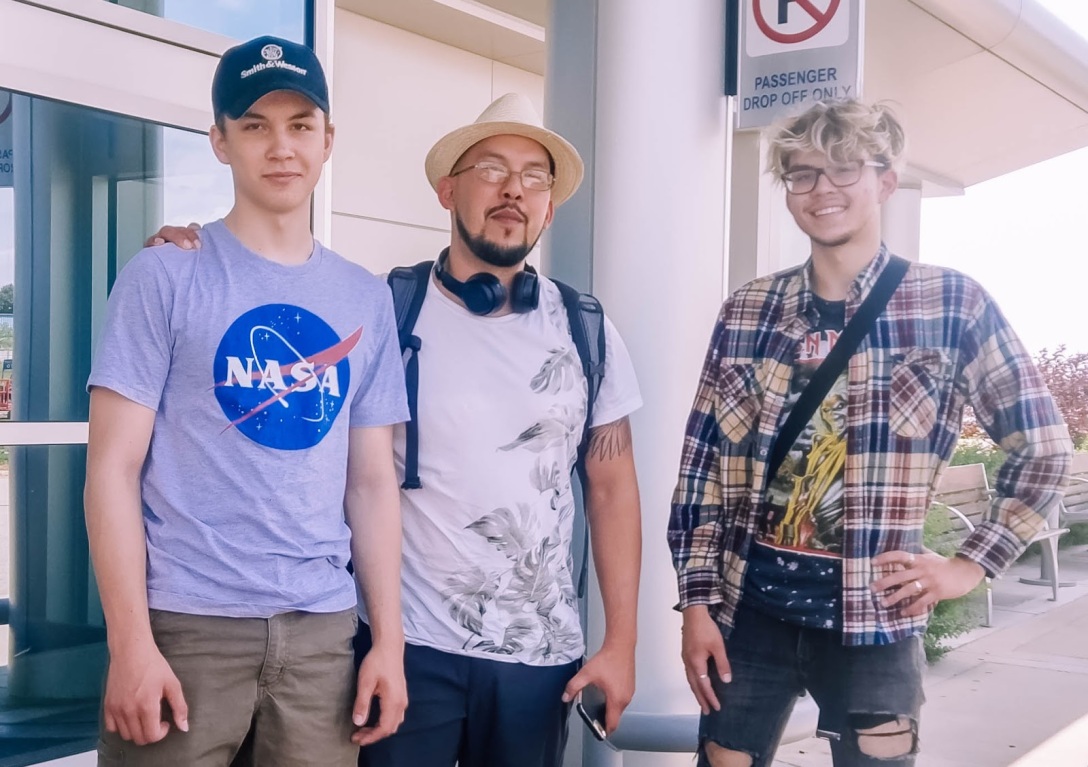 On June 29th, I was flying back to the US. It had been 10 months since I had left the Midwest, and I was about to spend 4 weeks in North America (3 weeks in the US, 1 week in Canada). Prior to my return, I wondered, what aspects of American life would seem strange and unfamiliar to me after living in Qatar for so long? Also, what were the things that I missed in the time that I had been abroad?

Upon my arrival in Chicago, there was a flight delay, so I missed my connecting flight to La Crosse. I spent the night in a hotel that the airline reserved for me. At the hotel, there was a complimentary dinner buffet. As I was eating the chicken, I could taste the Italian dressing coating the breasts and imagined the list of ingredients of the dressing. I knew that high fructose corn syrup featured prominently.
The next day as I was taking the elevator from my floor to the lobby, I was a little disoriented by the floor buttons. I kept looking for “G” before I remembered that I needed to hit “1” if I wanted first, or ground, floor. As I waited for the airport shuttle, a mosquito bit me. A small bump raised on my forearm. I hadn’t been bitten by an insect in a while.
When I arrived at the La Crosse airport, no one was waiting for me. My mom was running late, so I collected my luggage and waited for several minutes before she arrived. We hugged, and she said my boys were waiting for me at the car parked outside. At the car, there were two grown men! Both of my boys are taller than me now, and I have to reach my arms up around their shoulders to give them a hug.
On the ride back to her place, Zylan drove us. He had just woken up and hadn’t had his coffee yet, so he was noticeably crabby. This likely prompted him and my mom to bicker about some minor misunderstanding. Toward the end of their argument her retort was simply “You’ll miss me when I’m gone!” I chuckled. It was like watching my 18-year-old version of myself argue with my mom.

I spent most of my time in the US at my stepfather and mother’s house in Onalaska (neighboring La Crosse). I stayed in the guestroom on the first floor for the duration of my stay. This room was quite familiar to me because I slept there many weekends in order to spend time with my boys after their mom and I split. This wasn’t the house of my childhood, but it was the house of their childhood.
Because of my frequent weekends at my stepfather and mother’s home, I know their routine, so I have no problem feeling at home at their place. However, both of them like to cook and often have competing dishes that they want guests to try. For example, my stepfather might make a quiche, and my mother might make beef curry. Either my plate is a bizarre mashup of whatever foods the two of them prepared, or I end up eating two separate servings of their diametric cuisines. Still, after being away for the past 10 months, I knew that I was going to favor my mom’s cooking because I am unable to get good Vietnamese food in Doha.
My second day home, I woke up at 4am due to my jetlag. Since I was still vigilantly following my Qatar workout routine, I decided that I would go for a run at 5am. Normally in Doha, I run on a treadmill in my building’s gym. However, now I had an opportunity to run outside. My stepfather and mother’s home is situated in a coulee that used to be a farm before being turned into an upscale housing development. The route of my run was along sidewalks and bike paths and took me past homes with three-car garage, past a hobby farm, past several retention ponds. Going for picturesque runs outside was definitely an experience that I missed while I had been away.
After my run, I made myself a smoothie and sent my youngest son, Ronan, a message on Facebook, “You up yet?”
Several minutes later, “Yeah!”
“Let’s go workout,” I responded. Ronan has been religiously working out at the gym, so during my time in the US, I was going to get a membership at the YMCA and workout with him. This would be our time together. He is the quieter of my two sons. When he was little, he would get scared and hide behind his mother’s legs. Now he is taller than me and building his man body.

Movie and a Pub Crawl—Winona, MN

I had borrowed my stepfather and mother’s vehicle and was driving to visit a close friend G in Winona, MN (30 minutes away from Onalaska). Right after my ex and I split, I lived in Winona with him. We were both about the same age, both in the same English graduate program, both had kids in our early 20s, and both were divorced within a couple years of one another. It was kismet that we met when we did.
I was driving between the Mississippi River and bluffs—a road that I drove many times over the years and never grew tired of it. There was always changing scenery throughout the spring, summer, fall, and winter. I was trying to observe the speed limit, not wanting to incur problems with the law during my short stint back in the Midwest, and in my rearview mirror, I could see a pickup truck following behind me. Why doesn’t he just blast past me? But this was my Doha driving mentality. In Qatar, American pickup trucks are usually driven by Qatari males who tear down the road and flash you with their lights if they want you to get out of the way. The driver behind me was an older woman who probably made a run into town and was heading back home in the country. She patiently trailed behind me the entire drive.
That night G and I were going to see the Antman and the Wasp. We set off to walk from his place on the eastside of Winona to the theater in the center of the town. It was a cool July night, and it had been a long time since I had been able to walk anywhere that I wanted to go. In Qatar, all my wanderings had to be done by car, not foot.
We stopped at the Island Brewing Company for a drink before the movie. I ordered a double IPA. While in Doha, I had mostly stopped drinking alcohol. This was for a number of reasons, but one of them was that, if I was going to drink, I wanted to drink interesting beer. At the bars in Doha, you can order Amstel Light, Heineken, Corona, and Budweiser. There aren’t any craft brews. So, much like my embargo on Vietnamese food, I found it best to not drink beer until I traveled to a locale with a noteworthy beer culture—Wisconsin was such a place.

The last place that I lived and worked in the US was in River Falls, WI. A couple that I was good friends with kindly threw me a dinner party so that my former colleagues at the University of Wisconsin River Falls could all meet up with me. Everyone at the dinner party has at least a Master’s Degree and was an avid traveler, so I spent much of the conversation answering their very thoughtful questions about my experiences in and insights of Qatar.
“What surprised you the most about moving to Qatar?” one guest asked.
I responded, “How normal my life is there.” This stunned everyone.

I explained that in Qatar only 15% of the population is Qatari; 85% of the population is foreign. Thus, there is a sizable English-speaking portion of the country. As soon as I arrived in Qatar, I saw that the signs were all in Arabic and English. I could use English for most of my daily transactions and was able to eat and shop at familiar American establishments. Additionally, I now live 10 minutes away from work in a new apartment building. I drive the nicest car that I have ever owned. And, because I don’t have to pay income tax, I have more disposable income than I have ever had in my entire life, so I have been able to travel to foreign countries during the breaks.

My life in Qatar is not like a stint in the Peace Core. In many ways, my 10 months in Qatar had provided me respite from the predacious capitalism of America and the diminishing prospects in the field of International Education at Wisconsin colleges and university. I was pretty adamant to my guests that I did not miss scraping by as a US educator.

On the Fourth of July, my immediate family gathered at my brother Jason’s place in East Troy, WI. This would be the last time that we would celebrate at this particular home because he and his wife closed on another home in the town. My brother Francis flew in from Portland, OR in order to see me. I made a joke that he looked like Dr. Strange because there was more gray peppered into his hair on the sides of his head. He made a crack that my youngest son could lift more than me.

During this gathering, our family slipped into our regular routine. Though I had been gone for 10 months, after I had given everyone the gifts that I brought with me from Qatar, I quickly disappeared into the din and commotion of Jason’s two spirited daughters, no longer the center of family’s attention. This was completely fine.
I was not some young person who had just come back from their first trip abroad and was yearning to share with everyone experiences and insights that they had gleaned. I was a middle-aged man who had been abroad before, had grown sons, and was visiting friends and family members who were busy with their own lives.
Life in the Midwest, my friends and family there, American culture, all was still pretty much the same. I was not Rip Van Winkle who had just woken up to a changed world after sleeping for a century. If anything, my time in Qatar had rejuvenated me: I was a better version of myself—slimmer, more financially sound, and better able to be in the present with those around me.
Yeah, I had tales from my 10 months away, but now that I was back, I just wanted to be a Midwesterner. I contently waited for my mother to prepare my bowl of pho and watched my nieces try to slip a whoopee cushion underneath a family member’s chair.

1 thought on “My Days Back in the USA”