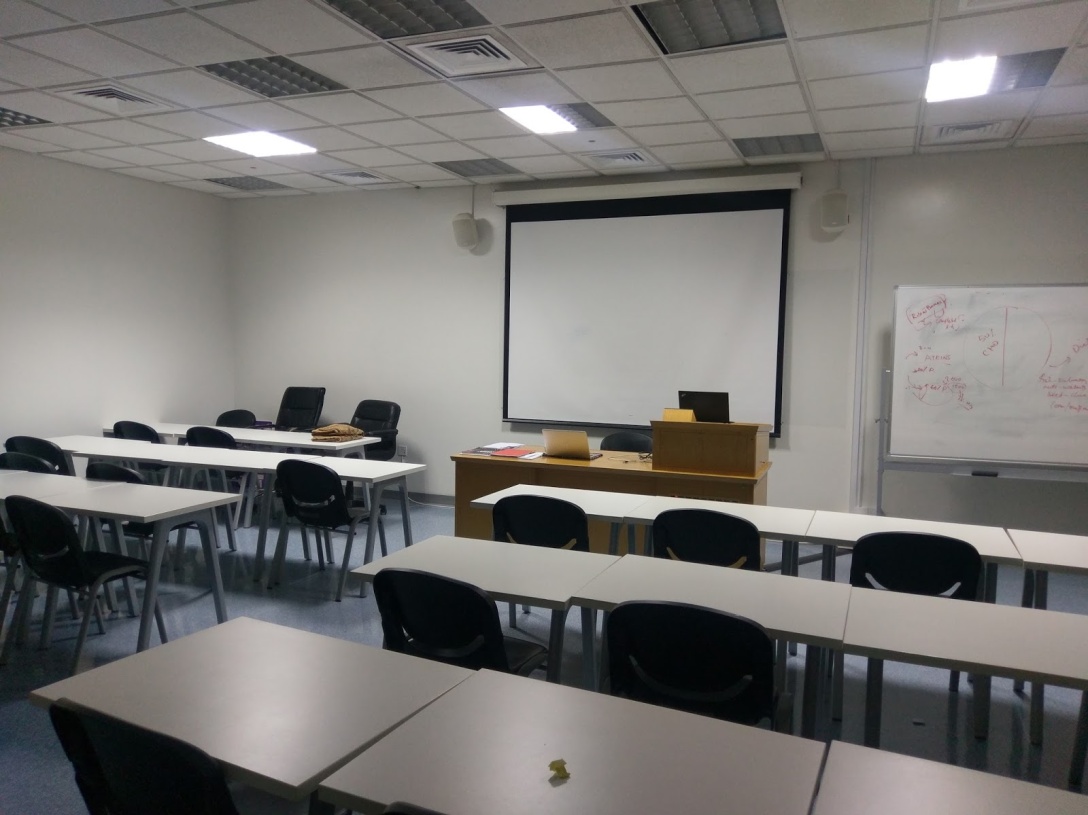 This week was my first week teaching at Qatar University (QU) and my return to teaching full time. For the past two years, I worked primarily as a student coordinator with an occasional class during the semester that I taught as overload. While I have worked with students from the ­Gulf region before—mostly male students from Saudi Arabia—this was also my first experience teaching in the EFL setting (English as a foreign language) and instructing classes segregated by gender. As I mentioned in a previous post, I was scheduled to teach one section of English for Communication and two sections of Business English Communication (BEC). One of my two sections of BEC was for male students while my remaining two sections were for female students.

Still, the biggest challenges that I experienced this first week weren’t with the students. My female students were quiet and shy; I imagine that it will take a while for them to become comfortable with me. My male students were livelier; I imagine that I will have to keep them from becoming too comfortable and walking all over me. Like many instructors in a new setting, the biggest challenge for me during the first week was navigating the campus, operating the classroom technology, and settling into the routine of my schedule.

To begin with, as I have said before, the QU campus is segregated into a male and female campus. There are separate buildings and facilities for the two genders. If a building is shared (e.g. the library or the College of Engineering), then the building will have different entrances and wings for male and female students. The segregated campus, however, is not the problem. From what I can tell, QU offers its male and female students access to the same level of classrooms, services, and amenities. Moreover, QU faculty and staff can access and explore all buildings on either campus, with the exception of men being able to enter the women’s activity center. The problem with QU—and this might be considered a good problem—is that the campus is huge! My office is in one building; my mailbox is in another building; and I teach in several different buildings across campus.

I don’t have an issue with walking and seeing more of the campus. However, when the temperature is 100 degrees, and I am wearing a collared shirt and dress pants, it doesn’t take much activity for me to start sweating. The last thing that I want to do is walk into a classroom sweaty and overheated, but when I have only 10-15 minutes between classes, and must walk from one end of campus to another end, the first impression that I have made with some of my students this past week is that I am clearly not accustomed to the heat yet.

In addition to size of QU and the oppressive summer heat, some aspects of campus aren’t designed ideally for walking. Qatar is a driving culture. People drive, even for short distances, where they need to go. In order to get from my office in one building to my mailbox in another, I must cross a campus street and its median, dodging traffic from both directions; cut through the library using the male entrance and exiting through the female entrance; and then wind through a parking lot that is partially walled off. There are pedestrian sidewalks around QU, but these routes are typically more indirect and would take me longer, exposing me to more sun and heat.

The other issue that I experienced this week was sorting out classroom technology. In my first classroom of the week, the technology interface wasn’t working. Not a big deal. I sent an email to IT, looked around the hallway for an empty classroom, and relocated there. Problem solved. The ongoing technology problem for me is moving between my Mac and PC laptops and using Blackboard instead of Desire to Learn (D2L).

I prefer and am accustomed to the Mac operating system (OS). I have not used, nor have used, a PC OS in quite a while—the last time I used a PC OS was Windows Vista in 2007. Still, QU gave me a PC laptop for use in the classroom, and I want to be proficient in the OS and its programs that my students are likely to employ. (Despite my personal promise to start employing the Google suite for creating documents, spreadsheets, and presentations, I was able to download Microsoft Office for my Mac laptop; thus, enabling me to stay within my Word, Excel, and PowerPoint comfort zone and not have to update my technological skill set.)

What keeps me able to move seamlessly from Mac to PC to smartphone is my Dropbox account. I store all my files in Dropbox and my devices are able to sync as soon as they have access to a Wi-Fi signal. During the past two weeks, I have been working with two laptops in front of me, looking pretty tech savvy like Hugh Jackman in Swordfish. However, the truth is that I can’t print from my Mac, or a Word file doesn’t open correctly from my PC, or I like how my slides look better on the Mac version of PowerPoint, or the touchpad on my PC laptop is being too sensitive and causing me problems. The reality of the past two weeks is that I am more of a n00b with two laptops in front of me than I might outwardly appear.

I probably bored many of you reading this blog with my technology gripes, so I won’t go into detail with my teacher technology gripes. Just know that Blackboard and D2L are online programs that teachers use to manage their courses. And, just like there is a difference between Mac and PC, there is a difference between Blackboard and D2L. Unfortunately, I was accustomed to D2L.

So aside from regularly trailblazing across the QU campus and having to develop my proficiency with another OS and course management system, little things about my routine have niggled me. For example, QU gave me two dry erase markers at the start of the semester. I promptly forgot them after my second class, and now they are gone! I have to carry A4 paper (not 8.5” x 11”) around with me in case I want to print something for class at the last minute. There are printers/copies everywhere around QU; however, you have to provide your own paper to print or make copies—and don’t forget to take your paper out of the tray when you are done, otherwise, sayonara! In some of my classrooms, the labels on the buttons of the smart podium are rubbed off. I don’t know if I’m adjusting the volume of the classroom speakers or shutting down the LCD projector! Finally, some days I teach between one and three classes and have to plan my coffee or food breaks around the lunch rush of the QU students. If I’m not careful, I might have to wait 15 minutes in line at Tim Horton’s for a cup of coffee that doesn’t have a ribbed carrying sleeve, because the server forgot to give me one, and I have to carry a scalding cup between two buildings like some Shaolin monk training ritual to toughen my fingers, just to find out after taking my first sip that the server not only forgot the sleeve but added cream to my order of BLACK coffee. Ugh!

Still, once I get everything sorted, I can focus on teaching and professional development. For my two courses, the Department of English instructors has developed a wealth of materials and constantly offer me various teaching ideas. I mostly have had to select the recipes that I wanted to prepare this past week. No painful deliberations of what to do or develop. Additionally, I have already been asked to lead a workshop at the end of October, am working on a TEFL Qatar panel presentation in January with four other new instructors, and co-pitching a survey idea that would be presented in March at a Focus on Language conference in Germany. All exciting opportunities on the horizon.

I just need to build up my tolerance for the heat, for the PC OS, and for coffee orders that sometimes go awry! Inshallah.